Totally confined within Pennsylvania’s Centre County, Spring Creek begins life at the base of Tussey Mountain, near the village of Boalsburg. Spring Creek is Pennsylvania’s premier brown trout fishery with more wild fish per mile than any other stream in the state. Limestone feeder creeks--Cedar Run, Slab Cabin Run, Logan Branch, and Buffalo Run (wonderful wild trout streams in their own rights)--supplement cold, fertile, limestone water to Spring Creek’s already trout-friendly flows. Springrsquo;s most productive water flows north, for 20 miles, to its confluence with Bald Eagle Creek at the town of Milesburg. But populations of both wild and stocked trout thrive far below this point. Trout average 10-12 inches, but do not let these smaller fish fool you. Spring maintains a good trout population from 13-20 inches and larger! The entire stream, from its source to its mouth, is catch and release, ensuring that these fish will stay in the stream, ready to challenge your skills. Legendary anglers George Harvey, Joe Humphreys, and Charlie Meck have called this water home. Come armed with your best nymphs, dry flies, and streamers and see if your skills can match those of the Pennsylvania masters. 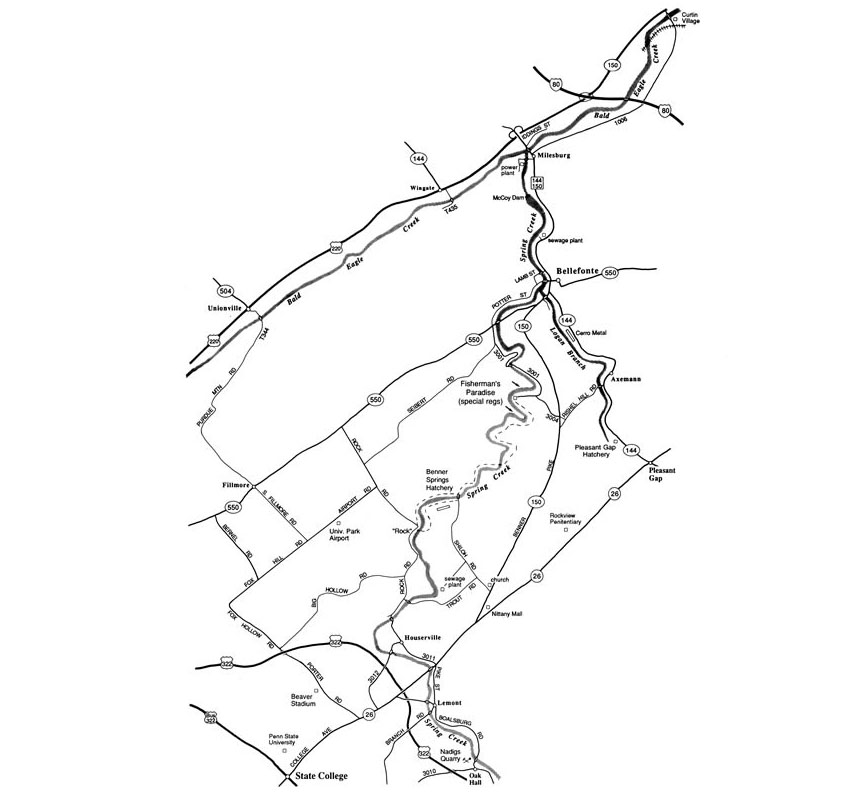 I was lucky to have had the opportunity to fly-fish Spring Creek in 1954, when the legendary Green Drake hatch appeared in late May. How was I to know that I had just witnessed one of the last good hatches of Green Drakes that this limestone stream would ever display? Thousands of Coffin Fly spinners that last night fell, as Green Drake duns greeted me on my first trip to this showcase of the East. Unfortunately, evil days were not far ahead.

Great crimes have been perpetrated on Spring Creek. In the late 1950s Spring received several doses of raw sewage, and many of the trout and most of the hatches vanished forever. Then in the 1960s and 1970s Spring endured addition polution - this time from chemicals like Depone and Mynex. Shortly after the last contamination the state decided to take the threatened stream off the stocking list and make it a "no-kill" stream. Guess what happened? Some of the hardier, more resilient hatches returned in abundant numbers, and the brown trout population multiplied. Now, 10 years after the last trout was stocked in the water, Spring boasta an abundant number of hefty streambred browns. Spring Creek no longer harbors the Green Drake, Brown Drake or the Yellow Drake, or for that matter many of the once-prominent hatches.

It’s interesting to visit the Frost Museum at Penn State University, just five miles from Spring Creek. Here you can examine vials of mayfly species found in Pennsylvania, including the only remnants of the fabulous hatches Spring Creek once accomodated. Many of these vials house mayflies from Spring Creek before it fell prey to pollution - mayflies that will probably never return.

Luckily, all is not lost, for the stream or for the hatches. Spring Creek has valiantly made a comeback, and three good mayfly and a couple of excellent caddis fly hatches now emerge annually. The Sulphur and Light Cahill seem to be somewhat pollution-resistent species. Both were the first two mayflies to appear on the Little Juniata after its bout with pollution, and both have returned to Spring in substantial numbers. The Sulphur appears on Spring from mid-May to mid-June. Sometimes when this species first appears in May it does so in the early afternoon. If you’re lucky enough to be on the stream at that time, you can plan to fish over rising trout for several hours. Within a couple of days of its initial appearance, however, the hatch resumes its normal emergence time, after 7:00 P.M. Ths Sulphur Spinner, with its tan body, can also be important to copy. The spinner is less predectable, since it sometimes appears before the dun, sometimes after, and sometimes is of no consequence at all.

The other pollution tolerant mayfly, the Light Cahill, appears about the same time of the year as the Sulphur but usually earlier in the evening. It’s an added bonus to fly-fishing Spring Creek in late May, becuase you’re consistently meeting and fishing over two hatches. The Cahill is larger than the Sulphur (the Cahill is size 12 or 14, and the Sulphur is size 16) and is a harbinger of the heavier hatch to come - the Sulphur.

The Trico hatch and spinner fall are extremely predictable on Spring Creek. The middle section of the stream was almost void of this species until a few years ago, and the upper and lower sections have dependable hatches and falls. The Trico falls in heavy numbers by the second week in July and continues to do so well into September. Spinner falls of this species occur between 7:00 A.M. and 9:00 A.M. on the hotest days and from 9:00 A.M. to noon in September. On warm, muggy mornings the spinner fall often last less thana half-hour.

Don’t overlook the importance of crane flies and midges on Spring Creek. You’ll find the former on the water from March through September in body colors of creamish orange and tan. You can often fish over pods of trout rising to afternoon hatches from November through February. Carry a gray midge pattern in size 24 to match these important winter hatches.

There are three distinct sections of Spring Creek. The three are distinguised because of different hatches and types of water in each. The upper section, from the source above Linden Hall downstream to Houserville, is a small meadowland limestone stream. The upper section of Spring has a different makeup of hatches from the rest of the stream. It harbors a good number of Sulphurs and a healthy Trico hatch, but it also has others that are not present below. Several species of Blue-Winged Olives (Ephemerella cornuta and others) appear daily in June and July in this upper section along with several Blue Quills and several Blue Duns (Baetis tricaudatus and others). Blue Duns, or Little Blue-Winged Olives as the are also called, appear as early as March and April.

The middle section of Spring Creek, from Houserville downstream to the upper end of Fishermen’s Paradise, was almost totally void of hatches for years, for it was this section that received the bront of the worst pollution. Within the last couple of years, however, several mayflies have beebly repopulated this area. The Trico now appears but not in the numbers it attains above or below, and the Sulphur and Light Cahill have also reappeared in limited quantities.

The lower section of Spring, from Fishermen’s Paradise downstream six miles to the creek’s junction with the Bald Eagle Creek, is larger, more productive water. Hatches like the Sulphur, Trico and Green Caddis become important again. Here you’ll encounter Green Caddis hatches copied with a size-16 or -18 downwing almost every morning in July and August. Here too you’ll find trout rising in August and September for Tan Crane flies-very common on the water after mid-morning. Fisherman’s Paradise, once a well-maintained and heavily stocked no-harvest, fly-fishing-only section, has lost much of its pervious notoriety.

Most of Spring Creek is readily accessible by car-much of the creek runs within 100 yards from a paved road. The upper end of the stream from it’s source to Oak Hall, is posted water. A secondary road from the limestone quarry just below Oak Hall to Lemont parallels the uper end of the creek. PA 26 crosses the stream at Lemont and PA 550 and 150 bring you close to the stream near Bellefonte and Milesburg.

Spring Creek has a relatively moderate flow with plenty of productive pocket water. The stream ranges from 30 to 40 feet from bank to bank and is fairly easy to wade, although aquatic plants make wading difficult in some areas. Several excellent tributaries enter Spring Creek and most of them contain streambred brown trout. Cedar Run, a typical pastoral limestone stream, enters at Oak Hall. Downstream, just below Lemont, Slab Cabin Run enters. This too has native trout but was also the cause of much of the pollution; it was a minor tributary to Slab Cabin that carried effluents from the State College sewage plant. Two other important tributaries enter near Bellefonte. Logan Branch holds plenty of large trout and enters Spring in the center of Bellefonte. Buffalo Run, another important native brown trout stream, joins Spring Creek at the lower end of Bellefonte. All of the major tributaries of Spring Creek are productive limestone streams.

Since its inception as a no-kill stream, Spring Creek has made a remarkable recovery as a trout fishery, with plenty of healthy streambred browns. The entire stream from Oak Hall to its mouth is classified as a no-kill zone. Try fishing the stream from May 15 to June 10 for some exciting hatches and plenty of trout.

See the Hatch Chart and Stream Maps for more information on Spring Creek hatches as well as best times and places to fish. Also, please visit Charles R. Meck at (charlesmeck.com) and look at his great selection of fly fishing books and his current schedule of appearances, book signings and educational events.