Fishing Creek originates above the town of Tylersville and flows north east into Bald Eagle Creek at Mill Hall. But the section referred to as the "Narrows" near the town of Lamar, is by far the most popular with anglers. A large spring at the Tylersville’s state hatchery adds a healthy dose of cold, limestone water and the necessary nutrients to produce one of the state’s finest wild brown trout fisheries. Anglers from all over the world come to fish this stream and its abundant hatches. Wildlife encounters are common within Big Fishing Creek’s beautiful, untamed, heavily shaded valley. White tail deer, black bears, turkeys, coyotes, and rattle snakes are a possibility anytime an angler decides to fish the "Narrows" Fishing Creek’s dynamic geology enables anglers to fish varieties of water types more commonly found in freestone streams--from fast flowing riffles, to runs, and slow, glassy pools. Wild Brown trout up to 16 inches and native brook trout up to 12 inches are also caught in this section. But fishing during the famed green drake hatch, or high-water streamer conditions, can produce the occasional leviathan brown trout--this is where Joe Humphreys caught his state record brown trout while night fishing. Fishing Creek is often the most productive Central Pennsylvania trout fishery during periods of extreme summer heat and low water. 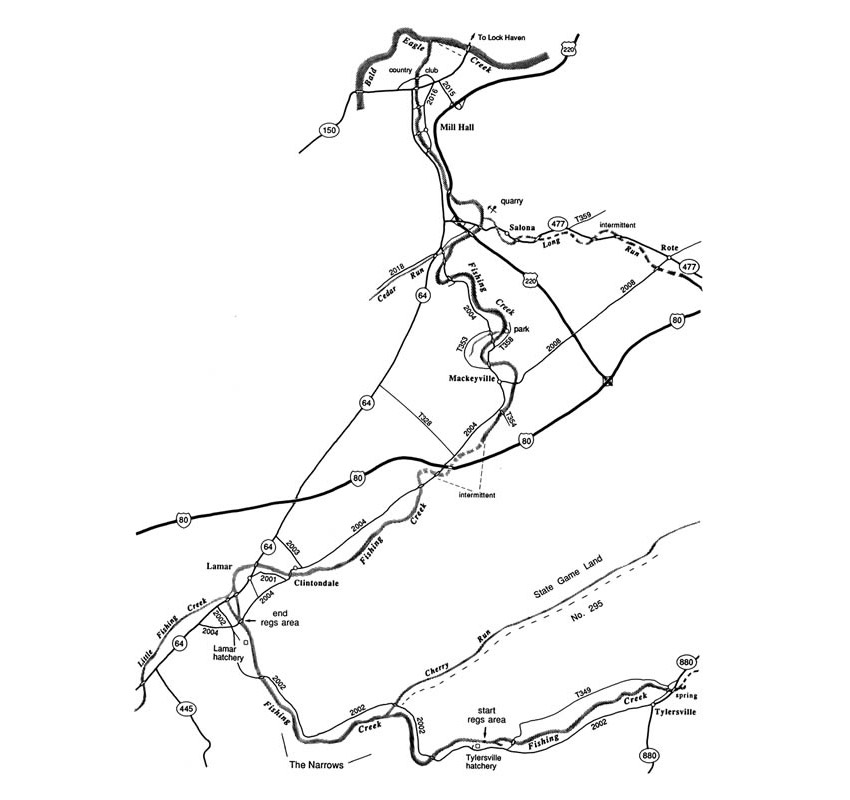 Pennsylvania probalby contains dozens of streams with the same names. There are many Pine Creeks, Cedar Creeks and Cedar Runs, Bear Creeks, and yes, quite a few Fishing Creeks. But none of the so-called Fishing Creeks is more productive, contains more hatches, and has consitently colder water all season long that does Fishing Creek in Clinton County. Fishing Creek originates near Loganton in souther Cliton County, then flows west and south for 15 miles until it enters the Susquehanna river near Lock Haven. A few miles below Clintondale and a couple of miles above Lamar, Fishing creek enters a section affectionately called the Narrows by many fly-fishing enthusiasts. The narrows section is about four miles long and carries trophy-trout regulations. This section is the most productive, but also the most heavily fished.

Special regulations end at the lower hatchery at Lamar. From this point almost to Mill Hall, Fishing Creek is classified as a wild-trout stream and receives no state stocking. This section, about seven miles long, has plenty of browns and brook trout and great hatches. From Cedar Run downstream through Mill Hall, Fishing Creek is stocked with large numbers of trout annually. This section too has excellent hatches ad is seldom fished after June.

Fishing Creek reminds me somewhat of teh Henry's Fork in Idaho because of the diversity and intensity of its hatches. The season begins almost immediately with the opening of trout season. First-day fisherman are often greeted with the Blue Quill, Quill Gordon and the Hendrickson. But this limestone stream doesn't pause after the early hatches, as so many Pennsylvania streams do. The third week of April produces a fantastic Black Caddis hatch that can be gratifying for the patient fly-fisherman. Durnig the hatch fish teh patter just under the surface. Trout sometimes swirl at teh wet fly and miss it. There are plenty of other caddis species on the stream. Check the stream bottom, and you'll see all types of Caddis larvae (Rhyacophila species) that measure 20 millimeters long. Many are bright green, and a green-bodied larval imatation on a size-10 hook works well.

The Sulphur begins early on Fishing Creek, almost the same day it first appears on the Little Juniata River. By May 13 or 14 the Sulphur is heaven enough to bring trout to the surface. This Sulphur has a distinct olive to its orange-yellow body. In my book, Meeting and Fishing the Hatches I indicated many times that the size of insects of the same species varies from stream to stream. The coloration of insects, especially mayflies, also varies from stream to stream. The Sulphur emerges from the Narrow downstream until mid- to late June.

Fishing Creek is probably best noted for its Green Drake hatch, which appears about a week alter than the one on Penns Creek. When the Drake appears in late afternoon and evening, any section of the Narrows is productive, and the trout seem to take the imitation more willingly than on Penns Creek. Fishing over the Drake during its peak emergence can be a three-hour event, and catching a dozen or more trout on the imitation is commonplace. As with Penns, however, when word gets out that the hatch is on, dozens of fly-fisherman show up for the spectacle and crowd much of the suitable fishing space. The March Brown and Sulphur emerge simultaneously with teh Green Drake, so if you miss the Drake hatch you will probably see one of the other two.

By mid-June Fishing Creek is still alive with insects. Yet to appear are several species of Blue Quills (Paraleptophlebia species), Slate Drakes, some Blue-Winged Olive Duns, Light Cahils, and a great hatch of Tricos beginning in mid-July. Tricos and Blue-Winged Olive Duns continue well into September. Dave Rothrock, of Jersey Shore, looks forward to the Slate Drake hatch on Fishing Creek. Dave's developed an excellent pattern for the nymph and finds it especially effective on this stream.

Fishing Creek is almost like three separate streams in its water conditions and hatches. Tricos, for example, don't appear on the upper section in the Narrows. They do, however, emerge from Mackeyville downstream, and for the patient late season angler the can be a boon. Green Drakes and Blue Quills are most prominent in the Narrows. Therefore, even though this stream contains a great hatch of a given species, it's important to know just where that hatch occurs. Often the least productive section is that area just above Mackeyville where much of the stream moves underground in July and August.

Fishing Creek has a dependable Hendrickson hatch in the Narrows. For years this hatch had annoyed me because it appears often before the first week of the season, well ahead of its normal appearance on other local streams, and also becuase the body color of the local Hendrickson is much darker than that of other Hendricksons. The species has since been identified as a subspecies of the true Hendrickson.

The tributaries of Fishing Creek produce adequate hatches and harbor some large streambred trout. Cedar Run near Mill Hall has some Sulphurs and Tricos and a healthy population of streambred browns. Much of the stream is posted, however. Ask permission on this small limestone stream before fishing. Little Fishing Creek, which enters the main stem at Lamar, is heavily stocked by the state and holds a decent trout population all season. Little Fishing is a typical meadow limestone stream. If you were a gambler, you'd be that the stream contains a heavy Trico hatch. It should, but it doesn't. There have been reports that this stream does hold some Green Drakes. Cherry Run, which enters in the narrows section, is lined much of the way with rhododendrons, making it difficult to fly fish, but it does contain some large trout.

Wading in much of the Narrows can be dangerous. The stream is filed with large rocks and boulders, and the bottom is uneven. The Narrows also has many deep pools and productive riffles. PA 64 crosses Fishing Creek at Lamar and numerous secondary roads take you within walking distance above and below.

You can spend weeks on Fishing Creek and still not know the true character of the stream. Try it almost any time of the year, and you will be impressed with the quality of the stream, the quantity of the hatches, and most of all with the trout population.

See the Hatch Chart and Stream Maps for more information on Big Fishing Creek hatches as well as best times and places to fish. Also, please visit Charles R. Meck at (charlesmeck.com) and look at his great selection of fly fishing books and his current schedule of appearances, book signings and educational events.